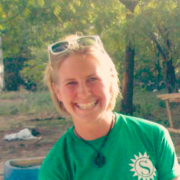 Today, we speak with Emily Woods of Sanivation on how one episode of Finding Impact helped her re-think how her company’s culture and values were created and defined.